In the early 1850’s little was known about the region of South America around Panama and New Grenada (now called Columbia), and many explorers ventured south into the hostile jungle regions south of Panama long before the canal was sited there, seeking the best possible route to take - preferably without needing locks.

The great German explorer and philosopher Baron Von Humboldt had said “... no level or height had been taken, no distance accurately measured that provided any degree of confidence in what benefits the territory held or terrain it contained....

Little more than a handful of enthusiastic but unqualified or poorly equipped explorers had preceded Kennish in investigating the New Grenada region. They had great enthusiasm but very little accuracy or scientific method and in some cases were even fraudulent in their claims for their discoveries

In June 1850 Kennish started his first exploration of the area for the Hope Association of New York, where he initially located and purchased for them the Caicedo Gold mine south of the city of Quibdo on a tributary of the Rio Atrato. During the same expedition he canoed over 200 miles along the Pacific coastline.

The map here shows the route of Kennish’s first expedition and is taken from the book. 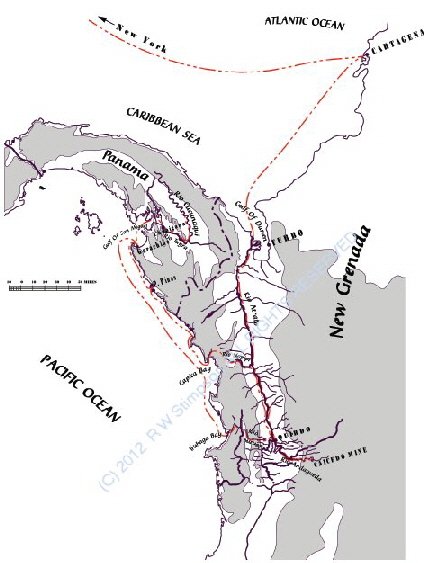