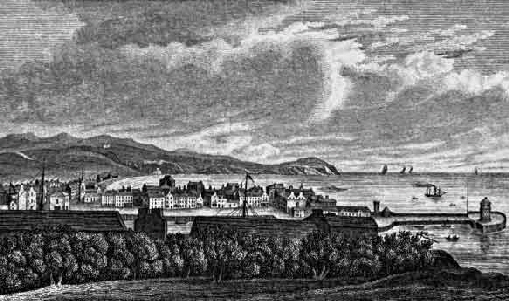 William started his career apprenticed to shipwright Thomas Crellin of Douglas. A copy of William’s Apprenticeship indenture is shown in the book.

After joining the navy some time after leaving the Isle of Man in the early 1820’s, he served on a number of ships, reaching the rank of Warrant Officer Carpenter, where his duties were many and varied.

The duties of the Carpenter were wide-ranging and essential to the viability of the vessel as a fighting ship. This seniority within the ship meant that the ship’s carpenter had to know his trade, and be a time-served craftsman with indentures gained under a shipwright.

He also had to serve time as a carpenter’s mate, and this time and ability would then be recognised by his captain or Admiral on promotion to Carpenter.

Once he had joined a ship as carpenter, he became responsible for the entire vessel. He would regularly, often daily, examine the masts and yards by going aloft, and inspect the hull and timbers on every deck. Storms and other heavy weather would mean he was on a high state of alert, and together with his crew he was prepared to make any running repairs to keep the vessel on station. He was also required to ensure the boats were ready for launching at any moment, and the pumps were kept in a fully functional and operational state.

Other less critical duties included keeping the ventilator rigged whenever the sea and weather conditions were appropriate, and to check the water supplies and the levels in the bilges. Additionally, he was responsible for the gun port covers or lids, and his duties included the closing and sealing of these on the lower decks in heavy seas or other bad weather. He was responsible for all the gratings, ladders, rooms, cabins and accommodation on the ship, and it was to the carpenter that any concerns about any part of the fabric of the vessel were addressed.

In preparations for battle, the carpenter also maintained a variety of plugs to stop up holes which may be made by enemy fire, and these would be of varying sizes and materials – such as lead, oakum, felt, rolled rope or canvas. At the end of the day, his final duty was to report to his first lieutenant that the ship – its masts, spars, yards and decks – were in good order and that his stores and plugs, tools and equipment were all in a fit and ready state.

Examples of the work undertaken on board HMS Ringdove, HMS Alfred and HMS Revenge can be previewed by downloading these extracts from the book (opens a PDF File).