The disadvantage of using black paint on board ship

As detailed here William Kennish served as carpenter from 1834 to 1837  under Captain Sir Thomas Hastings on HMS Excellent, the innovative and world-leading Royal Navy Gunnery School ship at Portsmouth.

During this time he maintained her and successfully proposed a trial of painting the warship an off-white colour. This was not for camouflage purposes, as had been suggested by some recently, but to reduce the damaging effects of sunlight on ships timbers which had been painted black. This was the common practice in the 1840's throughout the Royal Navy, which had become known as "the black fleet". William wrote about "The Disadvantage Of Using Black Paint On Board Ship" which was published by the Society of Arts, Manufacture and Commerce in 1838, whilst William was serving on board HMS Victory. The article was reprinted by the Mechanics Magazine, Museum, Register Journal and Gazette No 902 of Saturday November 21st, 1840, which appeared in Volume 33, June 6th-December 26th 1840, pages 489-490 -  see below. 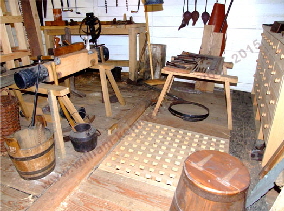 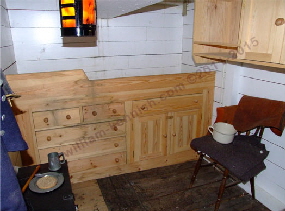 The colour applied by William Kennish to HMS Excellent in Portsmouth Harbour in 1835. The colours are based on the quantity of paint listed in carpenter’s stores demands and the red paint is listed as “Litharge” (red lead).

Photographs are of the Carpenter’s quarters, HMS Victory

The disadvantage of using black paint on board ship

The communication referred to by Mr. James, was made to the Society of Arts by Mr.W. Kennish, carpenter on board   H.M.S. Victory, and for which he received the thanks of the Society in their Session for 1837-8. As this paper is one of considerable merit, relating to a subject of great practical importance, we have extracted it verbatim from the Society's Transactions for the information of our readers. Remarks on the disadvantages that attend the use of Black Paint on board ship.

There is nothing that will prove this evil more than by observing the black streaks of a ship after being in a tropical climate for any length of time. It will be found that the wood round the fastenings is in a state of decay, while the white work is as sound as ever: the planks that are painted black will be found split in all directions, while the frequent necessity of caulking a ship in that situation likewise adds to the common destruction; and I am fully persuaded, that a piece of wood painted white will be preserved from perishing as long again, if exposed to the weather, as a similar piece painted black, especially in a tropical climate.

I have heard many men of considerable experience say, that black is good for nothing on wood, as it possesses no body to exclude the weather. This is indeed partly the case; but a far greater evil than this attends the use of black paint, which ought entirely to exclude its use on any work out of doors, viz.: its property of absorbing heat A black unpolished surface is the greatest absorber and radiator of heat known; while a white surface, on the other hand, is a bad absorber and radiator of the same: consequently black paint is more pernicious to the wood than white. This may, and has been proved, by innumerable experiments; but the following simple experiment may perhaps be considered worthy of notice:— Take four pieces of tin plate and place them together in pairs, having the inner surface smeared with lard so that they may adhere together; then colour one pair black, leaving the other white, and suspend them equidistant from a small iron ball made red hot: it will be found that the black surface presented to the ball absorbs the heat, and soon gets charged sufficiently to melt the lard, and the result is that the two plates immediately separate; on the other hand, the white remains firm, as the rays from the heated body are for the most part reflected by the white surface.

The foregoing experiment plainly shows, that wood having a black surface will imbibe considerably more heat in the same temperature of climate than if that surface was white; from which circumstance we may easily conclude, that the pores of wood of any nature will have a tendency to expand, and rend in all directions, when exposed under such circumstances,—the water of course being admitted, causes a gradual and progressive decay, which must be imperceptibly increasing from every change of weather. The remedy to so great an evil is particularly simple; viz.: by using white, instead of black paint, which not only forms a better surface, but is a preventive to the action of heat, and is more impervious to moisture. The saving of expense would also be immense, and I am convinced that men of practical experience will bear me out in my assertion.

Two striking circumstances, which have fallen under my own immediate notice, deserve mention. The first was the state of H. M. Sloop Ringdove, condemned by survey at Halifax, N.S., in the year 1828.

This brig had been on the West India station for many years. On her being found defective, and a survey called, the report was to the effect that the wood round all the fastenings was totally decayed in the wake of the black, while that in the wake of the white was as sound as ever; a striking proof of the different effect of the two colours.

The next instance I shall mention relates to H. M. ship Excellent, of 98 guns (formerly the Boyne.)

This ship is moored east and west, by bow and stern moorings; consequently, the starboard side is always exposed to the effects of the sun, both in summer and winter. In this situation her sides were painted in the usual manner of a ship of war; viz.: black and white, of which by far the greater part is black; this latter portion on the starboard side I found it impossible to keep tight; for, as often as one leak was apparently stopped, another broke out, and thus baffled the skill of all interested. In the meantime, the side not exposed to the rays of the sun remained perfectly sound. I then suggested to Mr. Kennaway (the master-caulker of her Majesty's dockyard at Portsmouth), who had previously given the subject consideration, the advantage likely to be derived from altering the colour of the ship's side from black to white. Captain Hastings having approved of the alteration, the ship was painted a light drab colour where it was black before, upon which the leaks ceased, and she  now continued perfectly tight for more than twelve months; and, indeed, I can confidently state, that the ship will last as long again in her present situation, as she had begun to shrink and split to an astonishing extent when the outside surface was black, and had which entirely ceased since the colour was altered.

Instances of the injurious effects of black paint on shipping generally, also on the masts, yards, boats, &c., are of daily occurrence, and decidedly point out the benefit likely to result from the substitution of the one colour for the other, and manifest advantage to be derived from its use by the maritime interest, though I am aware some may object to its use as not being ship-shape To such I have only to state, that the application of copper to ship's bottoms, and the use of chain for cables, have already met with the same foolish objection at the time of their introduction, since which period thousands of valuable lives , with property to a large amount, have been saved by their instrumentality.